Allan Halme was born in 1925 in Tampere into a shoemaker’s family. Childhood was during the great depression, but already the early age of 12 Allan was earning his first pocket money by shining shoes. During The Second World War boys were needed to do men’s jobs when they were at the front, so Allan started to drive a truck at the age of 15 with a special permit. After the war was over, Allan came to Pylkönmäki, which is in Central Finland. There he met Marjatta Sainio and the two young souls fell in love and they got married. Marjatta’s father had a store in Pylkönmäki and Allan took over the family business.

Allan Halme founded a company called “Pylkönmäen Nahkatyö” with his wife Marjatta Halme in 1955 August 19. Allan and Marjatta started producing bags, gloves and backpacks to lumberjacks. Production kept expanding, so Allan decided to build a small factory at Halla-Aho in Pylkönmäki with help of the village men. More people were hired and the product assortment kept getting bigger including traveling bags and biker’s bags. Backpacks sold well and production kept growing.

“Pylkönmäen Nahkatyö” changed its name and became “Savotta-Retkeilyväline”. In 1966 Allan found a suitable spot at Karstula and Onnela’s industrial area was born. At that time camping tents were the newest product on the Savotta’s catalog. Allan was responsible of product development; Marjatta and Esko Mäkinen were responsible of creating the prototypes of the products. Steel frame rucksacks were the number one selling product of the 60s. Back in those days, local smith Matti Pekkanen made the steel frames in his workshop at Kangasaho. Co-operation between Savotta and smith Pekkanen continued to late the 80s. Also the first nylon fabrics were introduced to the rucksack at the 60s.

At the time customers consist of private retailers, wholesale businesses and the Finnish Defense Force. Savotta made bread bags for the Finnish Defense Force and the development of the 10 person tents was started. In 1966 some of the production was transferred to the factory in Karstula. Marjatta Halme was the head of Karstula’s factory while Allan focused on the factory in Pylkönmäki, which at the time still was the main place of the company. Even though the employment relationships have been long, the company has offered jobs for over 250 people during its history. Even today, Savotta employees people who have worked at our company for 20, 30 or even 40 years.

The 70s were a time of internationalization and growth for Savotta. In the beginning of the 70s most of the production was transferred to Karstula, due the lack of manpower and poor logistics in Pylkönmäki. The company form was changed in to an incorporated company and thus the name was changed to Finn-Savotta ltd. The next generation Riitta and Anita started working at the company 1st July 1971. At the beginning of the decade exporting of goods to Sweden grew drastically, one of the biggest customers was JOFA ABC.

In 1974 the factory in Karstula increased to its current capacity and whole family Halme moved to Karstula. Workers from Pylkönmäki still continued to work for Savotta, work trips were made in a mini bus owned by Savotta. Riitta graduated from business school and Anita became a clothing industry technician and replaced her mother Marjatta, who sadly passed away December 23th 1977. Anita, following her mother’s footsteps took over as the head of production. The company started collaborating with Marimekko. Savotta produced and designed different kind of bags and cases for Marimekko, until they established a factory of their own to Sulkava. During the 70’s Savotta also started participating international fairs.

In the beginning of the 80’s Karstula’s factory was expanded so that the rucksack’s metal frames and tent poles could be produce locally. In the year 1982 Savotta rucksack 906 won a test in magazine called “Tekniikan Maailma”. During the same year the development of a combat vest for the Finnish Defense Forces started. Many other products were under development including: flak jackets, army tents and special military carrying systems. During the 80’s and the 90’s over 30 000 combat vestments were made.

Riitta Halme started as the new CEO in the beginning of the year 1992. A new factory was opened in Viitasaari which consisted of 15 workers. At this time Savotta started to make custom made models to the bigger retailers. Rucksack catalog was expanded also to anatomic models, which contained the metal back support inside of the rucksack. Child carrying packs were one of the popular products during the 90’s, also map cases were made for hikers and for professional use. In the year 1995 Finn-Savotta Oy was one of the first textile industry companies to receive an ISO-9001-2000 standard audition from the Finnish Defense Forces.

During the 90s Savotta expanded its catalog to also contain sleeping bags, because they were a popular item of that time. Because of the cold winter in Finland Savotta had to make products that would work also in cold temperatures. As a tent manufacturer, Savotta needed something that would keep the tents warm during the cold winter, and so production of Savotta stove was started in Karstula’s factory. Also with the winter theme came sledges that were made for skiers.

At the end of the 1980’s Allan became seriously ill, but survived the illness, although the recovery took a long time soon he was doing handy work at his ranch in Vilppula. At the beginning of the 90’s the illness reappeared and Allan passed away in the May of 1994.

Business world has changed a lot in 50 years. The EU has enlarged our inner market and globalization presents new challenges for the company. Savotta’s renewal also shows in the brand. Our logo has changed during the years, but still the classic products carry with pride the good old Savotta man -logo on them.

The Finnish Red Cross has recognized the know-how in Karstula. Savotta has supplied and manufactured many tents for many catastrophe sites through The Finnish Red Cross. This co-operation started the product development of Savotta’s Hospital tents. The double layered tent and the metal frame are all made in Karstula. Hospital beds are also a part of the hospital tent package. Tents made by Finn-Savotta, have been helping people in need around the world.

One of the future challenges Savotta is going to face in near future is the second generational change inside of the company. The sons of the family Elmo and Julius have already started to work for the company. 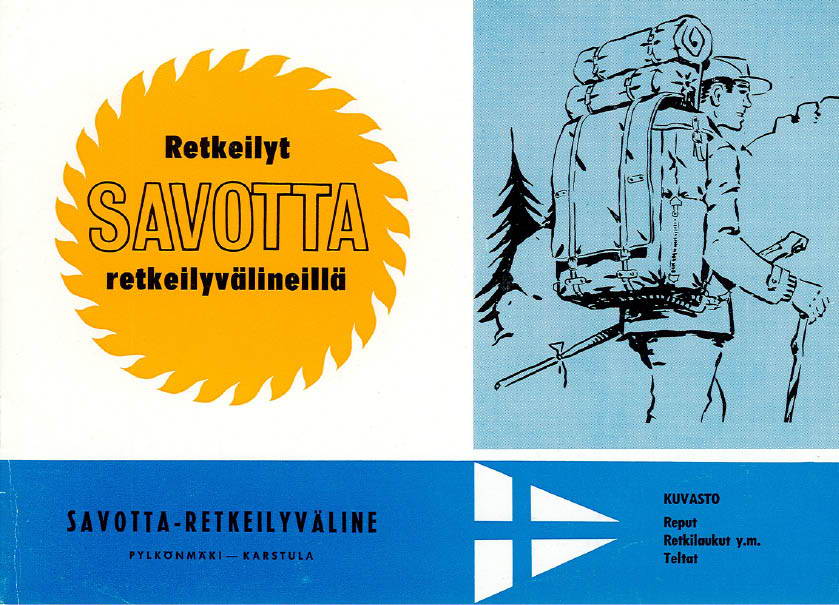 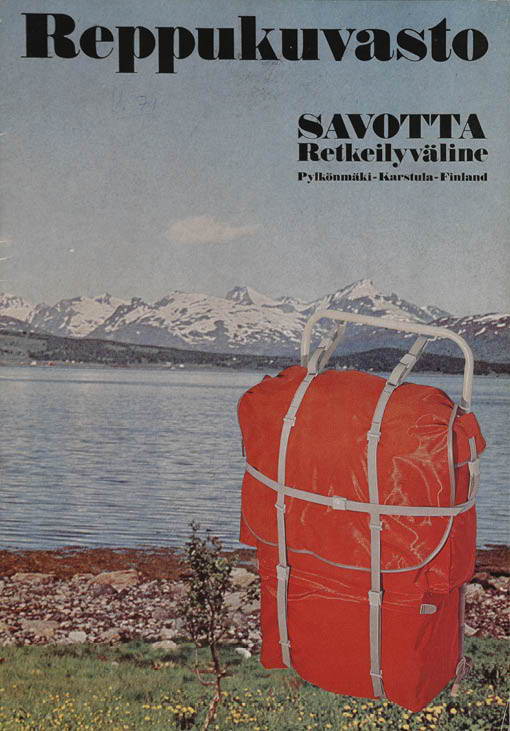 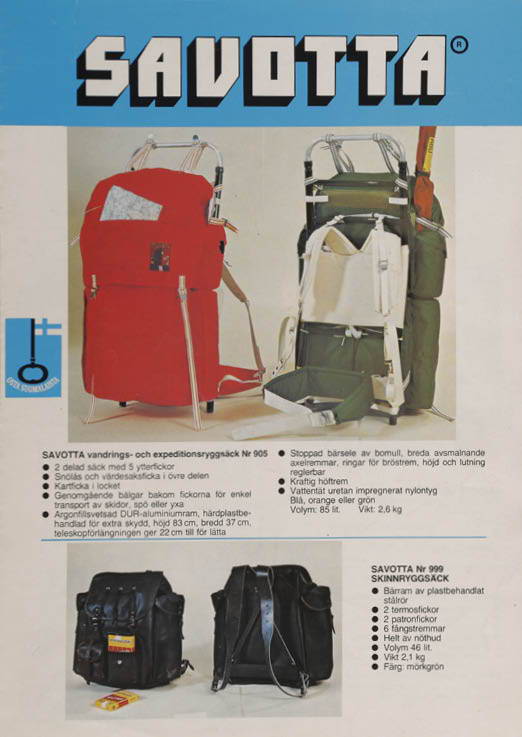 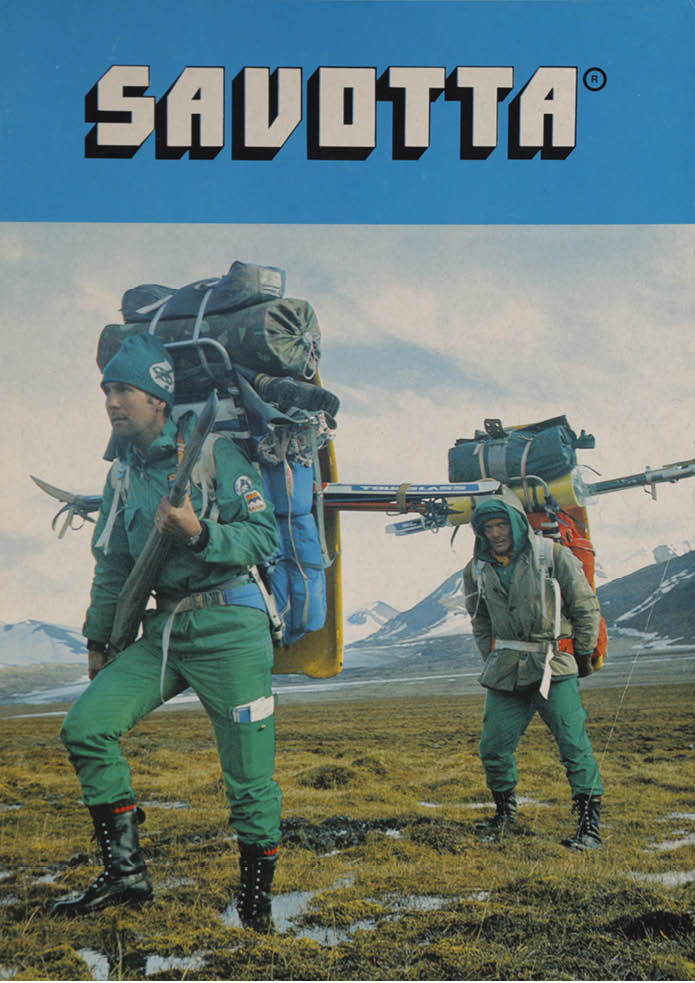 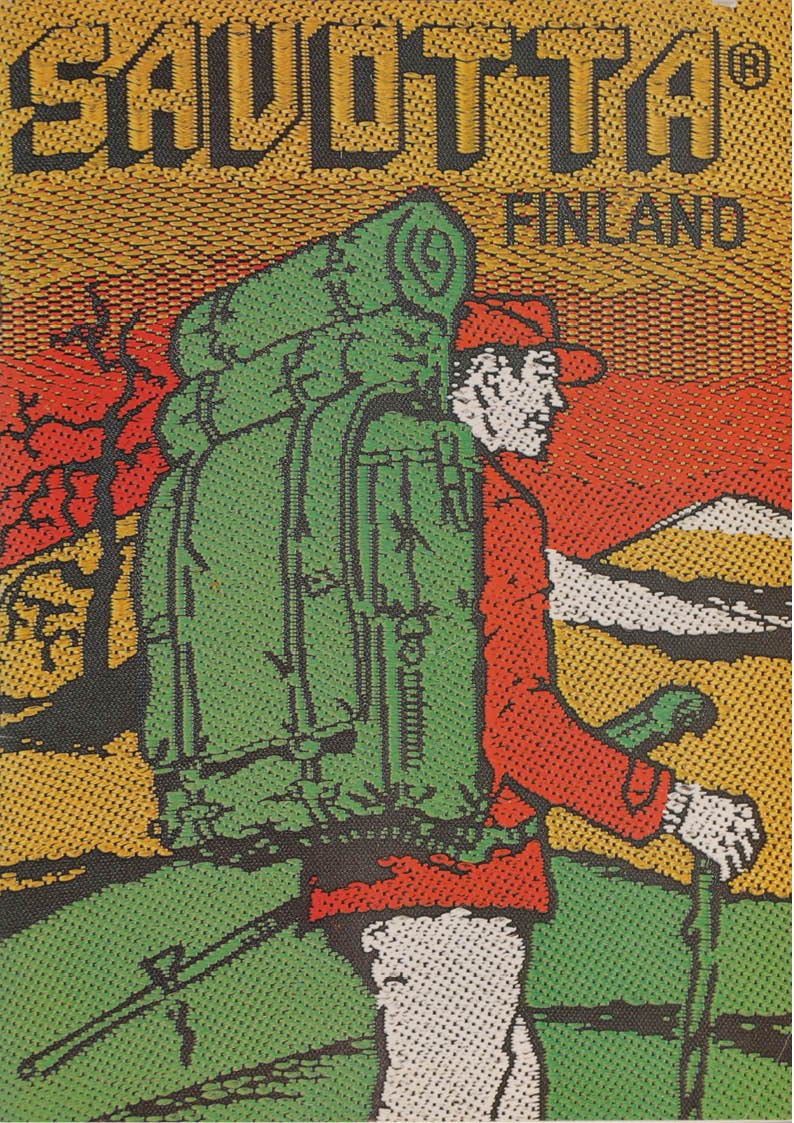 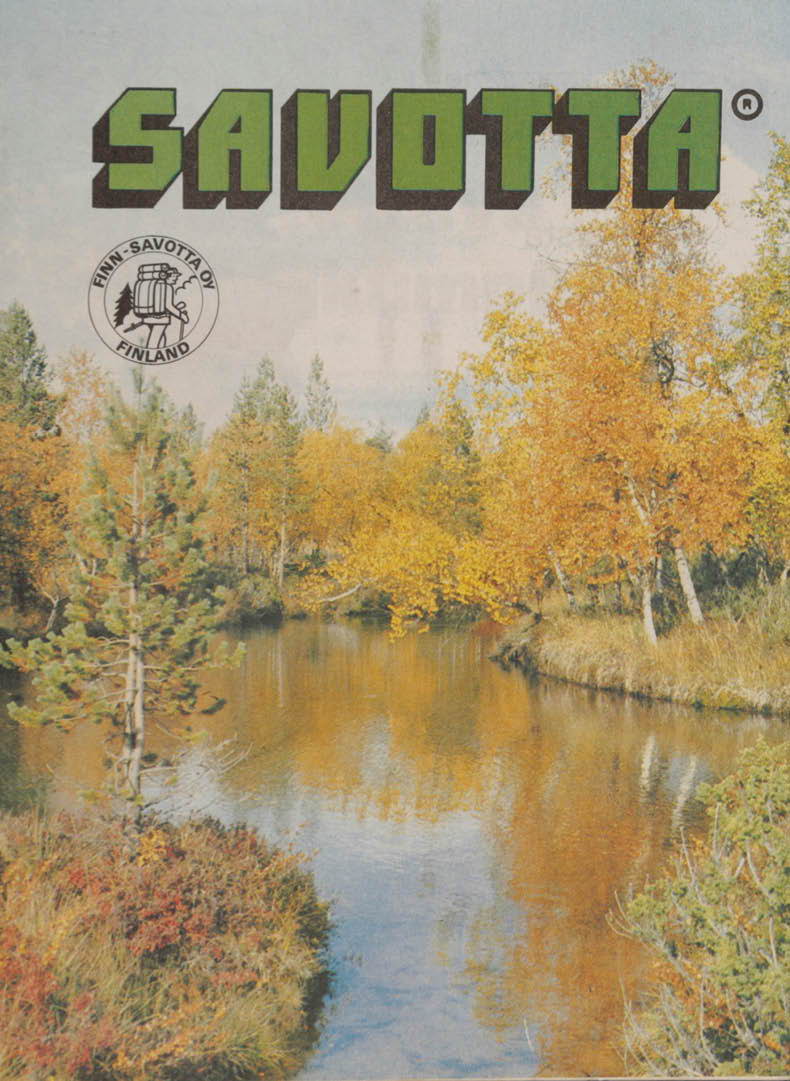 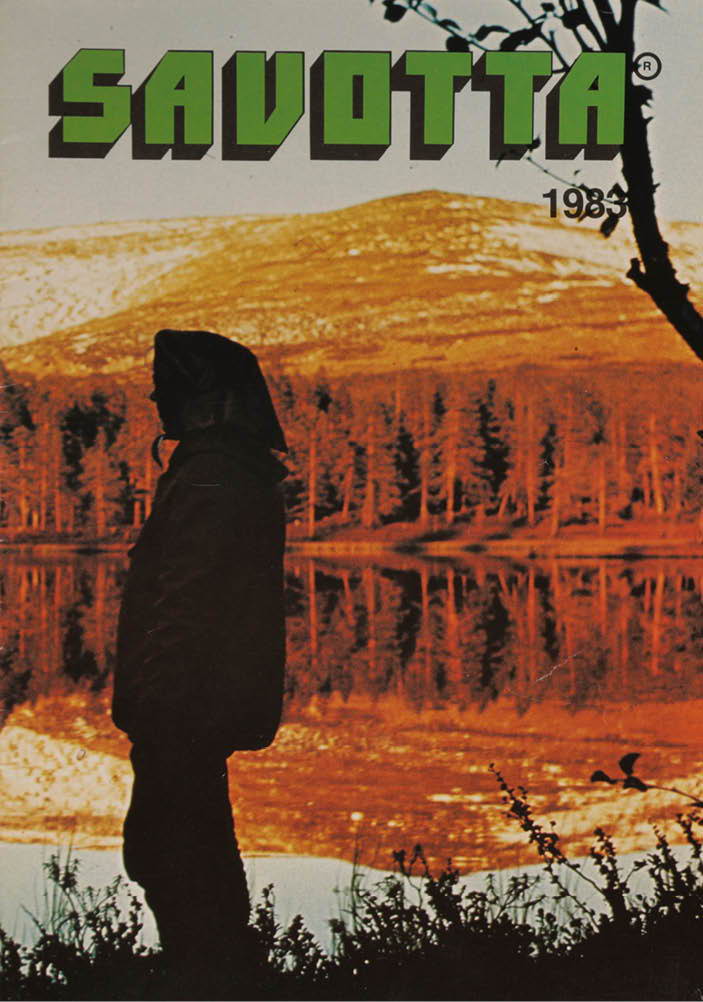 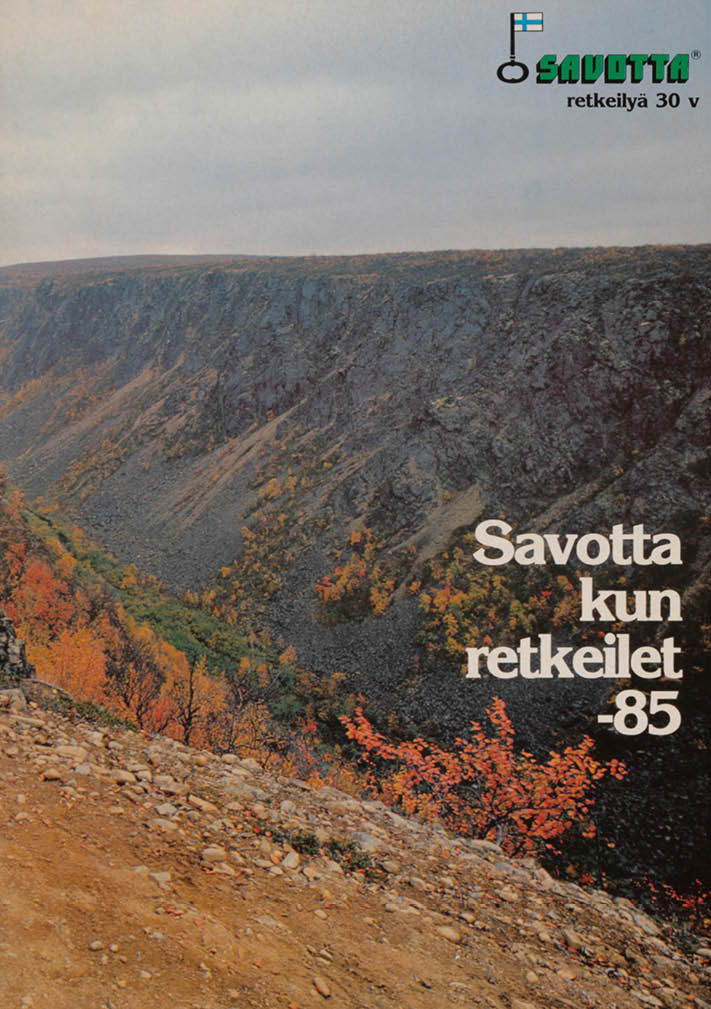 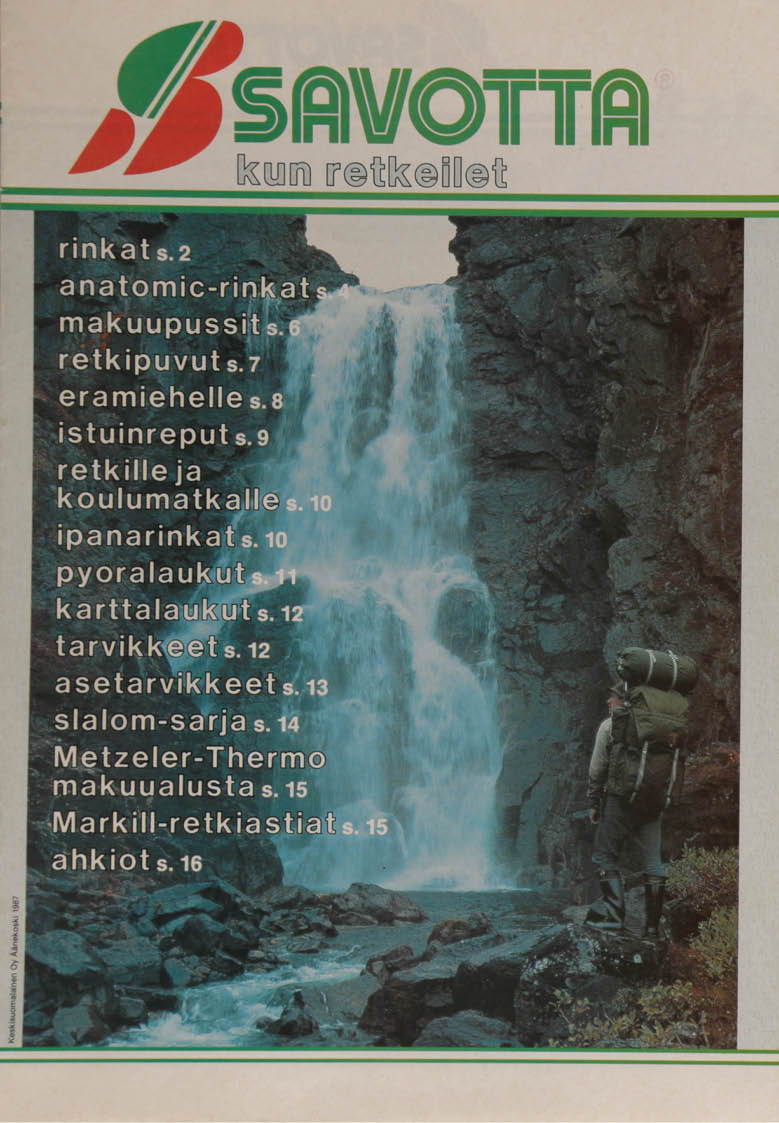 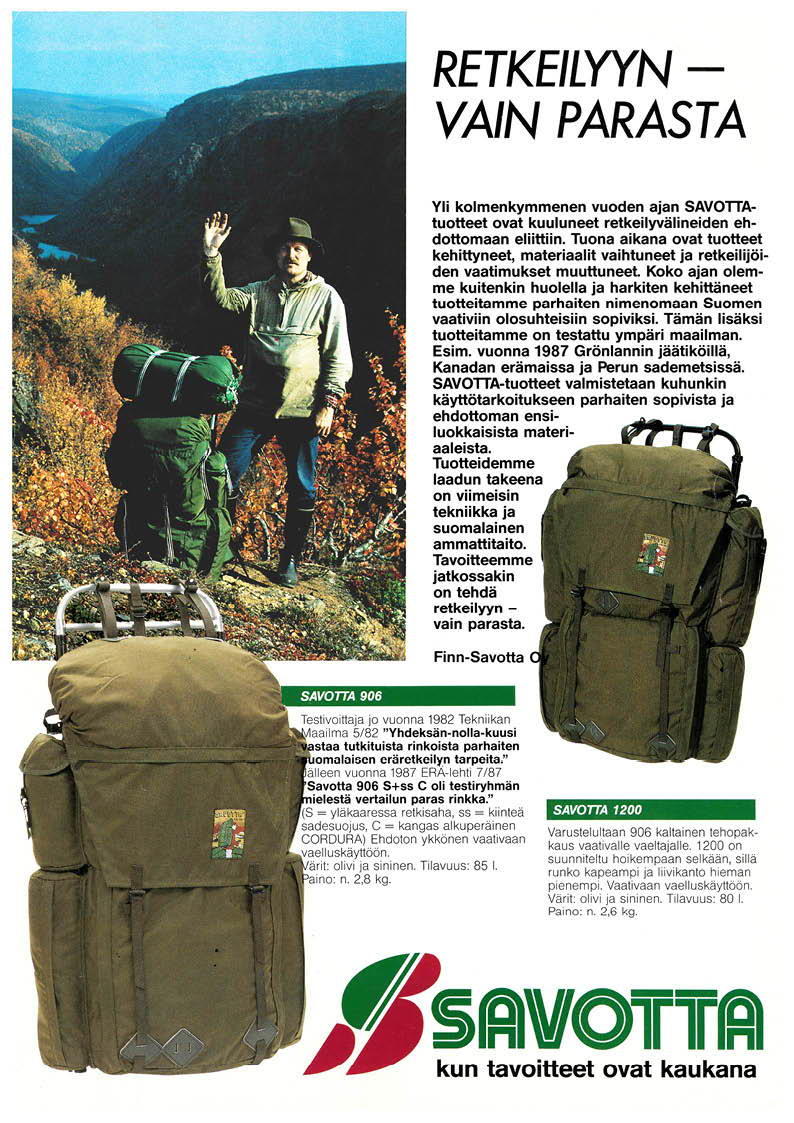 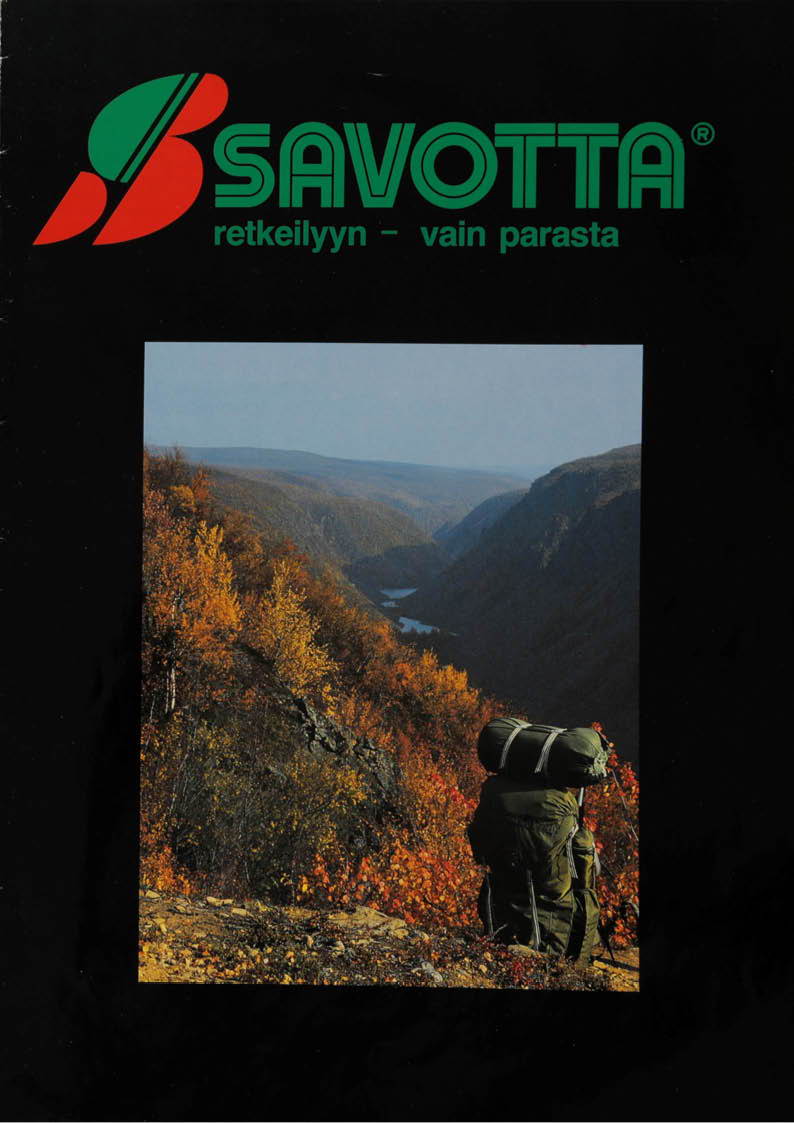 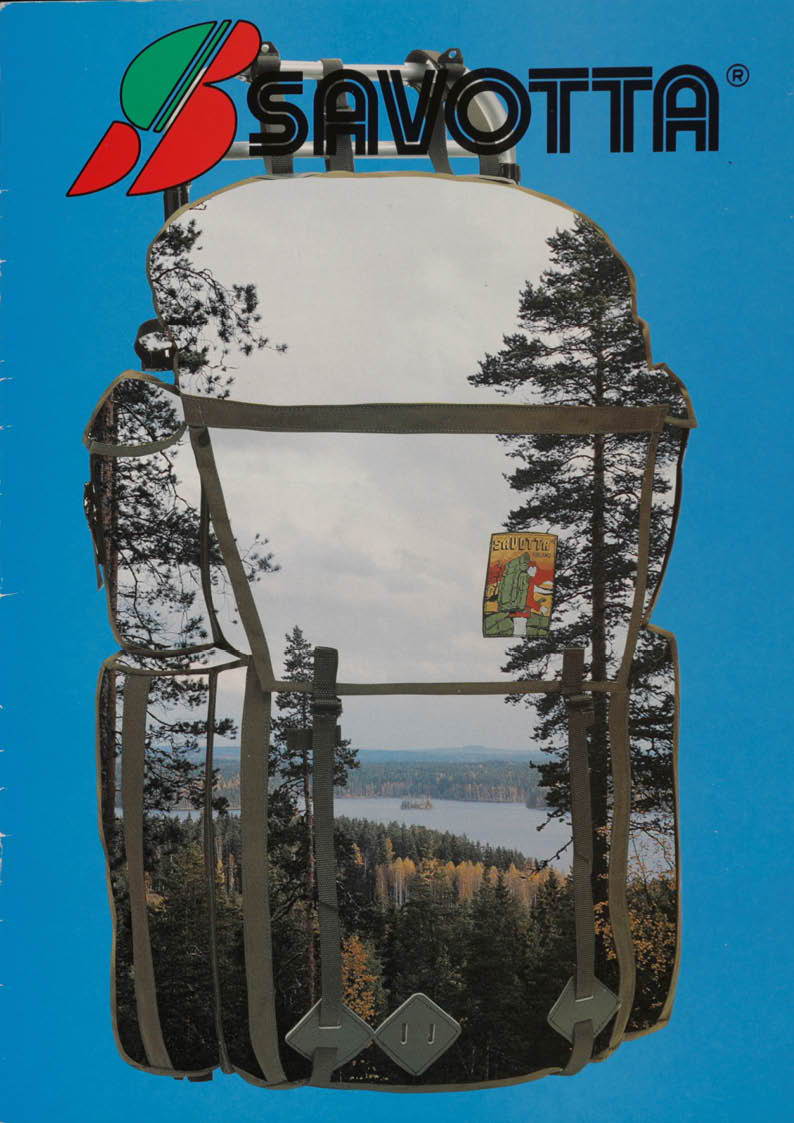 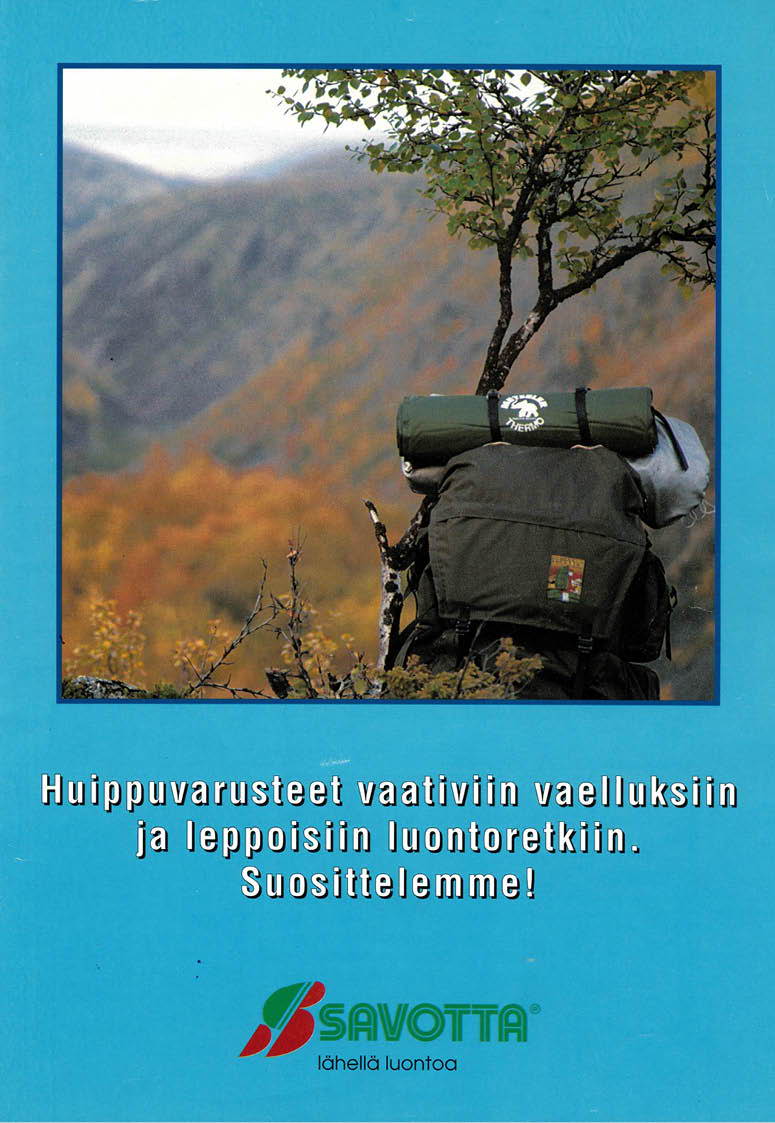 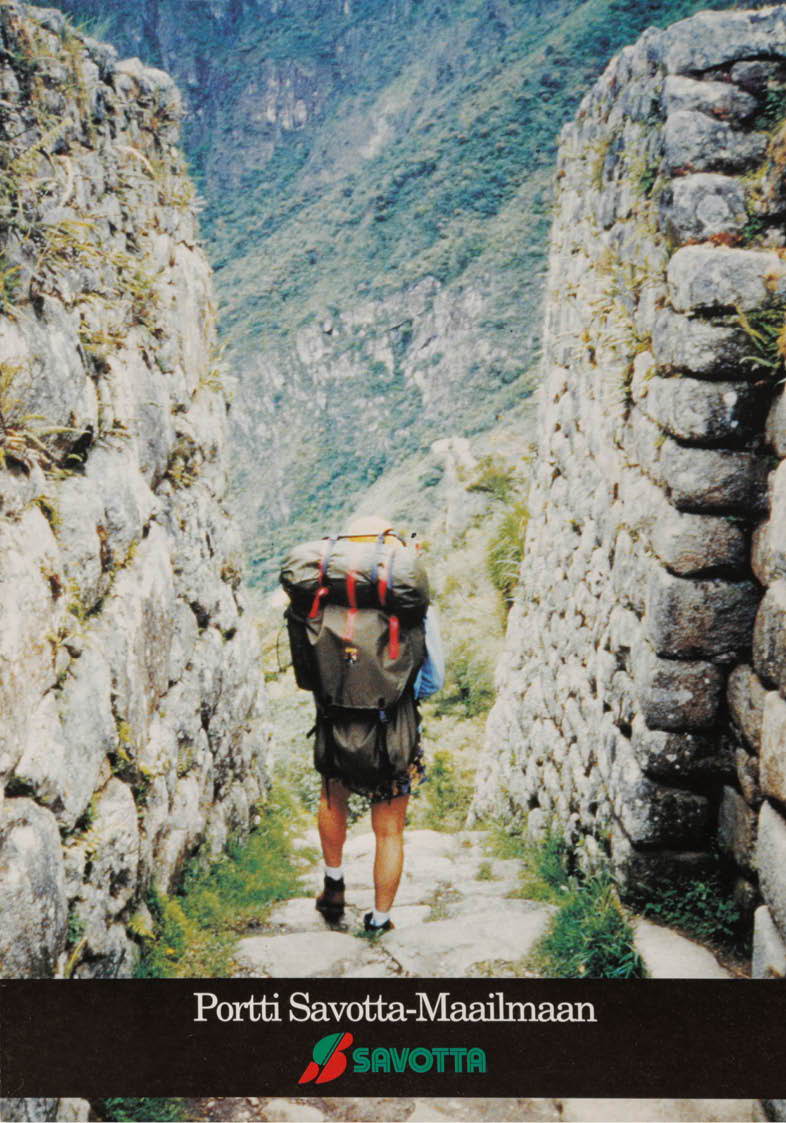 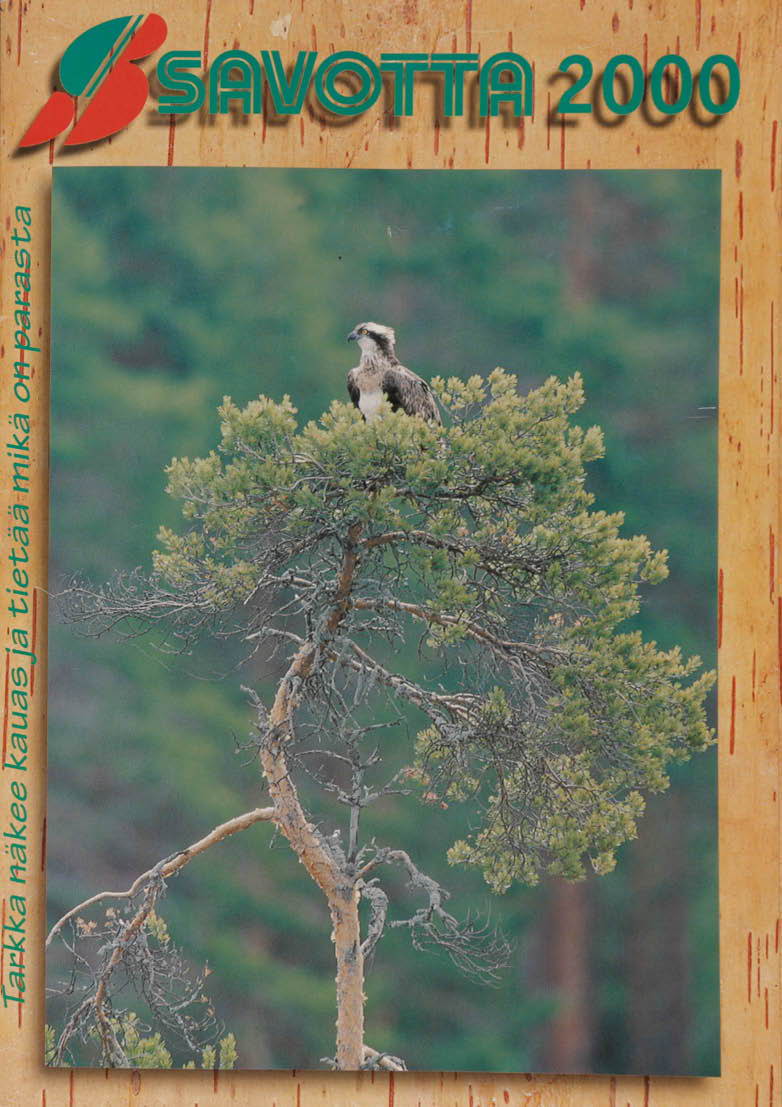 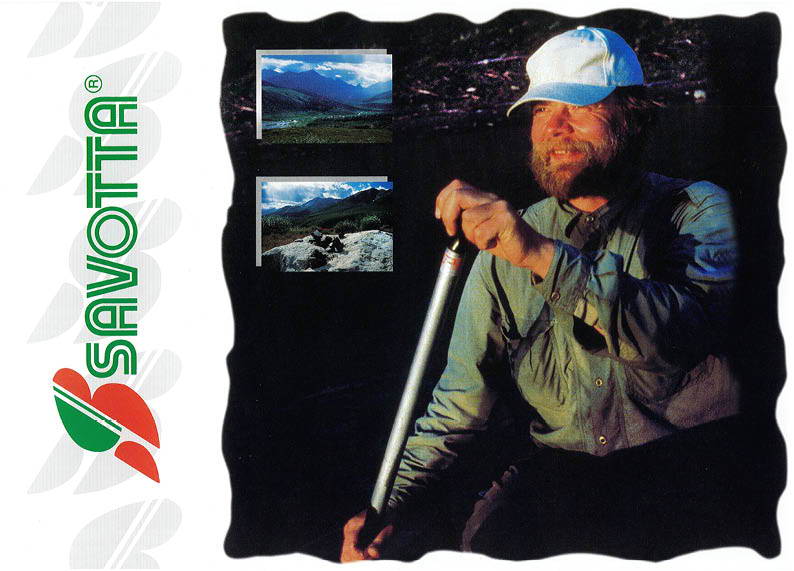